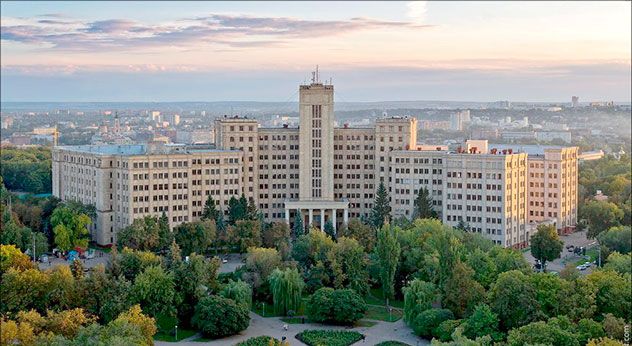 V.N. Karazin Kharkiv National University is one of the oldest universities in Eastern Europe. It was founded in November 1804, on the initiative of the prominent educator V.N. Karazin and in accordance with the charter of Tsar Alexander I.

The opening ceremony was held on January 29, 1805. V.N. Karazin Kharkiv National University made an important contribution to the Ukrainian national renaissance of the XIX-XXth centuries. It gave a powerful impetus to the emergence of Kharkiv as a major scientific and cultural center and an academic hub of Ukraine. Today V.N. Karazin Kharkiv National University justly rates among the best Ukrainian classical universities and is known in many countries.

The history of V.N. Karazin Kharkiv National University  is part and parcel of the intellectual, cultural and spiritual history of Ukraine. The names of many world famous researchers, scholars and educators are associated with V.N. Karazin Kharkiv National University, among them are P. Hulak-Artemovskyi, O. Lyapunov, M. Kostomarov, M. Barabashov, M. Beketov, D. Bahaliy, A. Krasnov, M. Ostrohradskyi, V. Steklov, O. Potebnya, O. Pohorelov and many others.

V.N. Karazin Kharkiv National University  is the only university in Ukraine that has trained and employed three Nobel Prize laureates: the biologist I. Mechnikov, the economist S. Kuznets, and the physicist L. Landau.

At different times titles of V.N. Karazin Kharkiv National University Honorary Members and Doctors were conferred on outstanding scholars and public figures of many countries, including J.W. Goethe and A. Humboldt, I. Franko and L. Tolstoy, P. Semenov-Tyanshanskiy, and others.

The title of Honorary Doctor of V.N. Karazin Kharkiv National University was conferred on the first President of Ukraine Mykhailo Hrushevskyi.

V.N. Karazin Kharkiv National University is associated with the first Ukrainian newspapers and journals and the first scientific societies.

The activities of V.N. Karazin Kharkiv National University have developed Kharkiv into a major industrial, scientific and cultural center. Many Kharkiv streets are named after professors, researches and alumni of the University.

The Center offers bachelor’s, master’s, candidate’s, and doctor’s degrees programs. Qualification licenses can be obtained through full-time and part-time (correspondence) modes of training. Some Schools introduce the education of foreign students in English.

The Center prepares students for further study at Kharkiv University or any other university in Ukraine or the CIS. Training at the Center is conducted in Ukrainian or Russian depending on the student’s choice.

International students, teachers, and businessmen are offered intensive courses of Ukrainian or Russian, as well as training programs of various length. Over 700 instructors and researchers from various countries have taken re-training courses at the Center.

Since the last 10 years 60 candidate’s degrees have been conferred, 13 of which were conferred in the last 2009 year by the University on international students.

Nowadays the 20 Schools of the University currently enroll more than 1300 international students from 50 countries.

Combine the convenience of living on or near campus, access to programs and services to help you excel academically, the opportunity to build lasting friendships, and comfortable, affordable living and you have the life of a University. The territory of the University and the main students’ routes from the hostels to the educational buildings are protected and patrolled by officers of guard service.

All rooms in hostels are provided with internet facility.

Rooms on campus are available to students. All hostel rooms are furnished and vary in size and number of conveniences. Dormitory rooms at hostel can accommodate 2 or 3 students to a room.

All rooms are equipped with bed, mattress, pillow, blanket, desk, chair, Almira, heating, water system and suitable lighting for both study and relaxation. There are common areas where students can play and mingle. Upon the students arrival on campus, specific accommodations are assigned and after a satisfactory health report the student will be accommodated to the room which is allotted to him.

Off campus housing can be obtained in nearby apartments. Available apartments and houses are furnished, and vary in size, cost and number of conveniences. Life in Kharkov is friendly and devoid rush. While at first some students may miss their home environment, native foods, or a hurried pace, they soon learn to appreciate and enjoy a cultural different their own.

In the hostel each room is attached with kitchen is provided for students to cook food to their own taste. Students will need to supply their own kitchen utensils. Meals may be bought from various food outlets. All the rooms are provided with heaters. Our hostels feature 24-hour access to security and emergency services, making it easy to get assistance when you need it. As a campus resident, you also have access to all support services such as campus Security Services, counselling Services and health Services.

Readers of the Library have at their disposal 5 circulation divisions, twelve reading rooms, an interlibrary circulating office, two special rooms for catalogs, the Center for Internet Technologies of the Library, a hall of literature on history of the University, a hall of area studies literature of Greece and Cyprus, the Window on America Information Center.

The Central Scientific Library server stores the full-text versions of study and teaching aids. By using the Internet, the electronic catalog enables you to make an online order and to have access to your virtual library card around the clock.

The University Library has a division of rare books. It is a book storeroom with the collection of valuable books, manuscripts, archive documents, containing 955 units. Among them there are incunabula, palaeotypes, foreign early printed books, editions on Glagolitic and Cyrillic script, universals (manifestos of Polish-Lithuanian Commonwealth), documents of political significance,etc. Chronological scope of these valuable books covers the period from XIV to XX century.

About Kharkiv
Kharkiv is a modern city with a 1.5 million population. It was founded in 1654, and is a large industrial, scientific, educational, commercial and transport center of Ukraine.

Amazing is the city in its beauty, monuments and architectural contrasts, with the marvelously interwoven past and present: the aristocratic manors of the nobility, Modern Era buildings, constructivist buildings of 1920s, Stalinist neoclassical structures form the unique architectural style of Kharkiv. The «Seven Wonders of Kharkiv» are the Monument to the Famous Ukrainian Poet Taras Shevchenko, the Mirror Stream fountain (the architectural landmark of the city), the Pokrovsky Cathedral of Kharkiv Pokrovsky Monastery, the Annunciation Cathedral, the Dormition Cathedral, the Derzhprom State Committee for Industrial Policy (Building of State Industry) and the residential building with a spire.

What makes the industrial giant of Kharkiv stand out is that it is very green. Kharkiv is located at the intersection of four rivers (Kharkiv, Lopan, Udy, Nemyshlia). There are 29 gardens and parks, 4 water parks, 92 garden squares, 5 quays and many other places for recreation in its territory. The gem of Kharkiv is Maxim Gorky Central Park for Culture and Recreation, one of the 15 best entertainment grounds in Europe, according to the famous travel portal Tripadvisor (2017 ranking).

Kharkiv is a multinational city: there are 50 national cultural associations there; it houses Catholic and Protestant churches, a synagogue, a mosque, prayer houses of many other religious denominations, schools with in-depth studies of the national cultures. It is worthy of note that in its long history Kharkiv has never witnessed national, racial or religious clashes of its citizens.

Today, Kharkiv remains stable and calm, with the national police ensuring safety and security in the city.

Make online application to any russian university with UKRVUZ

Get guarantee invitation letter from any university of Ukraine with UKRVUZ

Get guarantee visa in the nearest embassy

Come to Ukraine University and get excellent education